Traditional appeal: why we love Holly and Ivy

Holly and Ivy have been in British gardens for centuries. They’re great plants to grow, and they have fascinating stories as well, bringing history as well as beauty into the garden.

Holly (Ilex aquifolium) is one of our oldest native evergreen shrubs, used for centuries as hedging.  In the middle ages, prickly-leaved holly was said to protect the home from evil spirits, and it was considered unlucky to cut down a holly tree.

Ivy (Hedera helix) also has fascinating traditions and legends. The ancient Greeks and Romans associated it with the god of wine, and in medieval times, taverns sometimes hung a bunch of ivy outside their doors. It’s also seen as a symbol of peace and fidelity, and it’s often used in wedding bouquets.

How to grow Holly

With its bright berries and glossy green leaves, holly stands out in winter. Birds love it for the berries and as a safe nesting place. Holly copes well with most soil conditions, and it’s happy growing in sun or partial shade. There are variegated hollies too: ‘Silver Queen’ has white-edged foliage, while the dark green leaves of ‘Golden Queen’ are edged in yellow. Holly berries aren’t just red either – there’s ‘Bacciflava’ with golden yellow berries and ‘Amber’ with warm orange.

How to make sure your Holly has berries

Hollies are either male or female, and for a holly with berries, you’ll need to choose a female variety. The simplest way to do this is to buy your holly in winter, and pick one with berries on! You’ll also need to make sure there is a male holly nearby (if other hollies in your neighbourhood have berries, that’s a good indication). We’ve listed below some of the most popular male and female holly varieties.

How to grow ivy 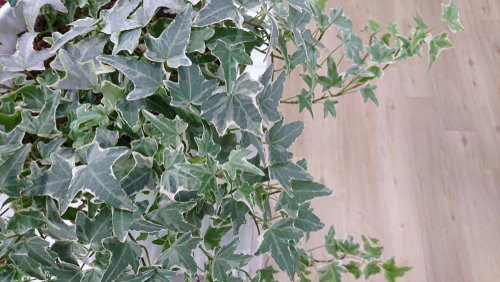 Ivy gets a bad reputation for rampaging out of control and damaging walls, but when properly looked after, ivy is a fantastically useful plant. It will grow pretty much anywhere, even in full shade, so it’s great for covering bare north-facing walls and structures.  Mature ivies make excellent nesting sites for birds, and bees love the round green flowers that appear in late summer

Ivy doesn’t have to be boring either. Variegated varieties like Ivy ‘Glacier’ with its cream-edged, grey-green leaves, or gold variegated Ivy ‘Goldchild’, are perfect for lighting up shady corners. To keep ivy under control, cut it back hard in early spring.

Holly and ivy aren’t just for Christmas - they’ll add life and interest to your garden all year round. Why not pop into our garden centre to choose your favourite?

What to sow in the kitchen garden in April